Isabela II Electric Cooperative (ISELCO II) was organized and registered as a non-stock, non-profit electric cooperative with the National Electrification Administration (NEA) on February 25, 1978. Its organization was mandated by Republic Act No. 6038 which was enacted on August 4, 1969 and later amended by Presidential Decree No. 269 (PD 269), also known as the National Electrification ,Administration Charter, promulgated on August 6, 1973. On June 22, 2007, ISELCO II also registered with the Cooperative Development Authority (CDA) by virtue of Republic Act No. 6938 (Cooperative Code) and Republic Act No. 6939 (Cooperative Development Authority Charter).

ISELCO II officially started its operation with the purchase and take-over of the operations of the now defunct Ilagan Electric Plant on December 1, 1978. By December 12, 1982 eighteen out of twenty two municipalities were energized namely: Ilagan, San Pablo, Cabagan, Sta. Maria, Delfin Albano, Naguilian, Aurora, Roxas, Gamu, Mallig, Tumauini, Benito Soliven, San Mariano, Quirino, Sto.Tomas, San Manuel, Quezon and Burgos. The four coastal municipalities of Palanan, Dinapigue, Divilacan and Maconacon remained unenergized for a long time because they are inaccessible and isolated from the rest of the coverage area by the Sierra Madre Mountain ranges. Palanan was energized on June 20, 1993 through a generator set installed by the National Power Corporation-Small Power Utilities Group (NPC-SPUG) while Divilacan, Maconacon and Dinapigue were energized through solar home systems. Dinapigue is now included in the franchise area of AURELCO.

ISELCO II is one of the two electric cooperatives providing electric service to the province of Isabela. The province is situated at the heart of the Cagayan Valley on the northeastern part of the main island of Luzon. It is bounded by the Province of Cagayan on the north, Nueva Viscaya, Aurora and Quirino on the south: Kalinga, Apayao, Ifugao and Mt. Province on the west and the Pacific Ocean on the east.

Its fertile plains and valleys are bounded by two mountain ranges, namely, the Sierra Madre Mountain range on the east and the Cordillera on the west.

Isabela experiences moderate rainfall which is more or less evenly distributed throughout the year making it an ideal rice granary. Isabela occupies a land area of 10,664.6 square kilometers which is 3.5% of the total land area of the country and is composed of thirty seven municipalities and one thousand thirty nine barangays. Ilagan serves as its provincial capital. 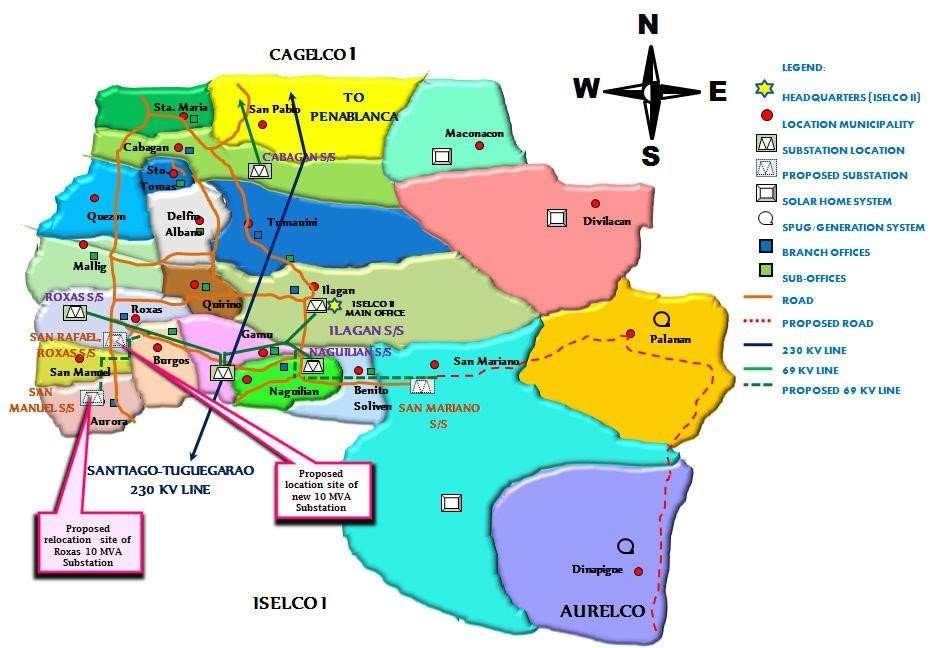 Over the past thirty years, ISELCO II has installed three substations with a combined capacity of twenty five MVA while a fourth substation rated at 15 MVA is owned and operated by the National Grid Corporation of the Philippines (NGCP).

OUR ENERGIZATION STATUS AS OF APRIL 2015, ISELCO II has completed energization of nineteen (19) municipalities in its coverage area.

Of the 522 covered barangays, there are 504 energized barangays or 96.55% energization level (Solar Homes excluded). Out of its 156,234 potential house connections, the cooperative has already energized 127,291 or 81.47 % of its potential households.

The policy-making function in ISELCO II resides with the Board of Directors (BOD). The coverage area is sub-divided into nine districts.

Each district is being represented by a duly elected director who serves for a term of two years and who may be re-elected up to a maximum of three terms. The duly elected directors elect from among themselves the officers of the Board. The general manager is an ex-officio member of the board of directors and in effect, the tenth member of the BOD.

Upon its registration with CDA on June 22, 2007, the incumbent members of the BOD became the members of the interim BOD during the transition period, to draft the applicable By-Laws and determine the paid up share capital of each member-consumer.

Our incumbent Board of Directors:

The general manager, supported by the four (4) department managers, the internal auditor and six branch managers, manage the day-to-day affairs of the cooperative.

Don't hesitate to contact us. We will answer you soon!